Benchmarking has claimed a big share of the management theory stage over the past five years. And for good reason…it works.

The concept is very simple: Find someone who is doing the same sort of thing you want to do, except better. Then copy them. One of the classic examples of benchmarking (before anybody called it that) is this scenario: "That dessert was marvelous. Would you mind giving me the recipe?"

Benchmarking works wonderfully. Cooks benchmark Paul Prudhomme and Julia Childs. Little girls benchmarked Princess Diana. Governments do it all the time, looking at how things are done elsewhere. Schools, too, are avid benchmarkers. The Institute for Healthcare Improvement has done a deal of good by getting groups of hospitals to pool their knowledge of how to treat a given illness most effectively. Experiments are done, data is collected, and the improved protocols are published for the benefit of the wider medical community. It can be a little more difficult in private industry, where competitive issues arise, but there are still many examples of successful benchmarking. Often, the "good example" company charges for its services, but this can be far cheaper for the company that is trying to improve than reinventing the wheel. 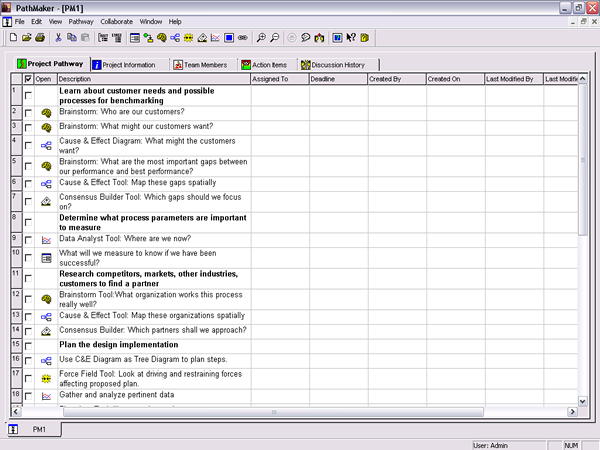 The tools used in benchmarking are essentially the same as those used in most management tasks. For creativity, there's brainstorming and affinity diagramming. For decision-making, you need structured discussion, multivoting, and weighted rating tools. For data collection and analysis, you need modern spreadsheet software with appropriate charts - especially control charts. If you are working as a team, it helps to have team support tools, such as central document storage, a project pathway, and computer-based agendas and minutes. SkyMark's PathMaker software is a great tool for guiding a benchmarking project. A pathway template for systematic benchmarking is provided. Like all PathMaker templates, you can use it as is, change it, or make your own. PathMaker also provides all the key tools you will need to plan and execute your benchmarking project. Which saves you time and money, and gets you a better result.